It is all too easy to get bogged down into negative perspectives based on current politics and its manifest failings. In its recent newsletter, World Goodwill shows that there is actually much to celebrate and be positive about that is happening across the world today. It highlights the work of ten organisations that are wresting with necessary changes to the global mindset:

It is possible that a transformation of the global zeitgeist is indeed in progress. These organisations represent rays of the light showing the way forward through the dark, materialistic and egotistic times many fellow citizens are currently living through.

You can read the summaries in the above newsletter,
or follow the link to any individual website to find out more.
Apologies for any misrepresentation in my briefest of overviews.

Featured image is from the World Goodwill Newsletter.

It’s a bit of a shock to realise that Lombardo is probably right.

Psychologically, evolution is the key to understanding this. We seek not to go back to some previous situation, but to evolve and grow to a new, transformed level, where we have learned from the past to address the challenges of the present new situation.

Evolution does not demand that we abandon technology and go back to feudal times, that we abandon large scale farming for rotation farming of small plots, that we stop travelling around the world, that we become Luddites and reject all new technologies, and retreat into our localities. Life does not, cannot, go backwards.

Evolution does demand that we, and the system of which we are a part, evolve and grow. We must transcend and overcome the problems that have emerged from previous stages of our development, from the over-development of the little ego, from the corresponding misapprehension of the role of the egoistic ‘sovereign’ nation state, from the lack of recognition that the economy is part of the ecology rather than a competing and overwhelming competitor, from the lack of real empathy with others and the natural world. This is what climate breakdown, pollution of land, sea and air, species extinctions, gross economic inequality and associated problems are teaching us.

The longer we take to respond, the more extreme the provocations caused by ourselves become. We have so-called ‘leaders’ acting like spoilt children, trying to inspire populations with supposed earlier glories and visions of becoming ‘great again’, trying to win some great power game against each other. This is all illusion and regression.

It is time for humanity to grow up and flourish through addressing these problems, rather than retreating to supposed former glories while they overwhelm us.

This is the evolutionary meaning of sustainability.

What is the meaning of getting old? Is it something like this:

“the challenge of growing old is not to conquer aging but to enter a natural, meaningful, and profoundly transforming process”? 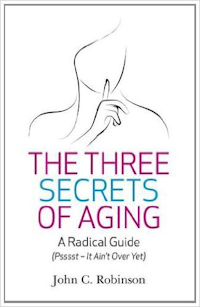 If you think it is, then you will probably like John C. Robinson’s book The Three Secrets of Aging.

It is good to think that aging can be a meaningful process that can positively contribute to society, rather than just a desperate hanging on in the face of increasing tribulations and eventual infirmity. Again, Robinson gives a positive vision, akin to playing a part in a New Renaissance:

“…the aging experience described here can eventually become the path to a collective transformation and the discovery of a new world.”

Part 1 tells the story of the authors own coming into the aging process and becoming aware that it is not about more ‘business as usual’ with the preoccupations of earlier years, but more about an emptying of consciousness, a spiritual transformation to awareness of who we really are – a sort of modern form of enlightenment, away from the everyday concerns of the ego and its thinking monkey mind. It is the ego and the personal identity that actually keeps us away from our inner core. From this perspective, aging is a process of transformation of consciousness, and the individual is contributing to a collective process of transformation.

Part 2 offers three ‘secrets of aging’. The result of aging is seen as the creation of Elders, wise people who have always been valued by native peoples. The work involves both psychological and spiritual work, transforming loss and change, away from the life we knew with its materialistic concerns, into meaning, wisdom and renewal. Squarely facing our own personal death is a key task of aging, catalysing our initiation. We can finally reach a state of pure consciousness, untroubled by the previous interminable concerns of the ego mind. The author refers to the Cosmic Consciousness promoted by Richard Bucke over 100 years ago.

Eventually, yes, the body will in some way break down, and it will eventually be time to pass on into the Mystery. But that too is all right, a natural part of the process, no longer resisted by the ego.

In part 3 the author offers ‘A Spiritual Blueprint for the Enlightened Elder in the Twenty-First Century’. He highlights the need, in that the effects of our separation from nature are becoming increasingly apparent – the technological ego-maniac period is increasingly running into the buffers.

“Coming to our senses means experiencing the Earth directly as a vast, intelligent, living and divine being everywhere expressed in a marvelous diversity of forms and processes.”

The Master must regain control from His Emissary, in the terms of Iain McGilchrist’s book The Master and his Emissary, reviewed elsewhere.

There is much food for thought in this book. For me, John C. Robinson offers an inspiring vision for the process of aging, and its relevance as part of our collective experience.

The bottom line is if you like the overall thesis you are likely to benefit from reading it.

My Tweets
Back to top