When a particular subject lights something up inside you, it’s worth taking notice. For me, one of those is the numbers – specifically the whole numbers, or integers. Thus was I from childhood drawn to mathematics, and later to Greek philosophy via Pythagoras. The former gave the outer mechanics of numbers, the latter suggested that numbers had a more mystical and imprecise meaning, leading to later interests in subjects such as numerology, and to astrology, where the numbers lurk in the background.

So I was a sucker for these two books which approach the numbers in completely different ways:

For people such as me, Eli Maor has written an engaging book about the relationship between music and mathematics. The development of musical scales from Pythagoras to the early 20th century is an interesting story, reasonably well explained, from Pythagoras’s whole number ratios through the equal tempered scale exemplified in the work of JS Bach to the experiments of Stravinsky and Schoenberg.

The fascination still seems to lie in those magical simple ratios of musical resonance: the octave 2:1, the fifth 3:2 and the fourth 4:3, from which are derived the Pythagorean Scale, which is nearly ‘right’, but in the end not adequate for use in orchestras with different sort of instruments, as Maor explains. Always the whole numbers are beautifully simple, but prove too limited to describe the real world, hence the subsequent invention of all the panoply of mathematics, irrational numbers, imaginary numbers, the calculus and on and on.

And in the end, always and tantalisingly, the maths cannot fully describe the real world, which we know thanks to the insights of Kurt Gödel.

Alain Negre’s book is about number as archetype – the qualitative aspect of number, which was revived in the 20th century by psychologist Carl Jung and physicist Wolfgang Pauli. All begins with 1,2,3, and 4 – just as with the Pythagorean scale. The qualities of these 4 basic numbers are explored and particularly related to the work of Jung, and to the triplicities and quadruplicities of astrology.

There are rather incomprehensible (to me) chapters relating the numbers 3 and 4 to current theories on the evolution of the cosmos – rather speculative, I think. Negre goes on to suggest that the astrological zodiac with the 12 signs is another projection of these number archetypes, including discussion of the axis crosses and the oppositional polarities in a chart of the 12 signs.

So the book is both familiar to me, in an astrological sense, and almost incomprehensible when relating to modern cosmology, which must be partly due to my own failure to keep up with this field. In fact, I had a similar reaction to an earlier work some years ago Number and Time by Marie-Louise von Franz. It feels like there is something important there, but the author has not quite managed to express it in a way that is easily comprehensible to me (of course this may be a commentary on me, rather than on the author’s work).

So yes, number still has that magical pull, but these books didn’t greatly enlightened me. Nor did they blunt that fascination with the numbers.

Music by the Numbers is much the more readable.

There is an increasingly frequently told tale of the vicissitudes in the development of human consciousness over historic times, of the loss and reconnection with an understanding of who we are and our place in the scheme of things, of the golden thread that runs through history, of the recovery of balance in the human psyche, of the various periods of renaissance of the highest spirit of humanity…

Gary Lachman is an able storyteller. In his book The Secret Teachers of the Western World he tells this tale, giving pictures of the significance of many key actors along the way – the secret teachers. To my mind this story of the polarity of movement of humanity between the extremes of darkness and renaissance is of utmost significance, particularly given the dark times that threaten.

END_OF_DOCUMENT_TOKEN_TO_BE_REPLACED 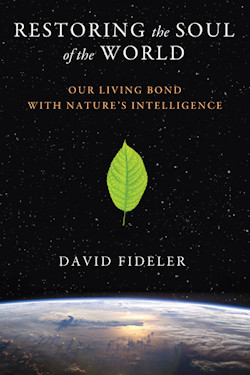 Review of the book by David Fideler, subtitled:
‘Our Living Bond with Nature’s Intelligence’.

This is a story that cannot be told too often – our story from the beginnings to now, in the tradition of such a magnificent telling as Richard Tarnas’s The Passion of the Western Mind first published in 1991.

David Fideler’s great breadth of knowledge and understanding is on show in this tour de force, as he traces human development and our relationship with the natural world over millennia. END_OF_DOCUMENT_TOKEN_TO_BE_REPLACED