It’s that time of the year in UK, where dandelion clocks appear in abundance, to the great delight of children, who love to blow the seeds away. I must admit to tending to take them for granted, but when you really take a good look, how amazing are these crystal-like spheres suspended over the grass.

They’re also not that easy to photograph close up with an instant camera. I managed the following with my Panasonic TZ80 travel zoom by using the ‘post-focus’ facility, whereby you can select the best from several frames taken at the same time.

As a child I once had a project to take dandelion clocks into school for the lesson in the morning. Sadly it was a very windy that morning, and I don’t think any clocks arrived at school intact! Rather traumatic for us children!

Walking by the bayou in Houston we often come across gangs of tens of small birds high up in the trees, silhouetted against the bright sky, even on a cloudy day. The initial reaction is that they’re impossible to successfully photograph with just a travel zoom (Panasonic TZ80). However, it’s amazing what you can do with maximum zoom, followed by a bit of image editing afterwards, mostly to crop and brighten up.

These are clearly waxwings, with characteristic crest and yellow-tipped tail – a very colourful perching bird, although you do not get much of an impression of that colour from the ground.

I even managed to get a reasonable crop of an individual bird showing more detail.

Waxwings are also found in northern Europe, but not much in the UK.

One of he highlights of our visit to WWT Slimbridge – a peregrine falcon landed to consume a bird (lapwing?) that it had just taken in flight. It was just visible to the naked eye and showed up reasonably in portable 8x binoculars, even better in the ‘scope someone had focused on it.

The best my Panasonic TZ80 travel zoom could do resulted in the rather pleasing (to my eye) impressionistic image above. There clearly aren’t enough pixels to give a decent photograph.

Some birders have answers to this. Some carry SLR cameras with huge telephoto lenses, others have a fair sized spotting telescope, possibly with a ‘digiscoping’ attachment to take photographs on their mobile/cell – both have to also cart around a tripod. Three big issues – cost, bulk and weight.

We all have to make our own compromises. Maybe I’ll stick to impressionistic photography. Or what about those bridge cameras…

There are literally thousands of birds around at winter feeding time at WWT Martin Mere. On our recent visit, among the larger ducks, geese and swans there appeared a number of these much smaller waders – ruffs. They seemed rather diffident, as most waited on an island bank for the larger birds to feed before creeping in to find some leftover seeds. The odd one joined in the mêlée, disappearing in a sea of duck, goose and swan legs.

By the time they got close enough to photograph with my Panasonic Lumix TZ80 the light was not good, so my shots are not too sharp.

Surprisingly, the male ruff is a startlingly attractive bird in summer plumage, with a highly colourful ruff around the neck. I was once so surprised to come across one a few feet away from me at an RSPB reserve, that I simply forgot about the camera easily to hand.

These ruffs were probably winter visitors. The RSPB suggests that the UK’s summer breeding population is very small.

I have a new respect for those wonderful images of birds in flight that you find on the blogs of various photographers. Since there were so many cormorants flying around at the location of my last post, could I get any decent results with my little travel zoom (Panasonic DMC-TZ80)?

Of course, the camera speed is not fast enough to freeze the bird in flight (see featured image of blurred flying cormorant), so you need to focus and pan as you take the photograph. Easier said than done, the speed at which these birds fly. I soon learned to track them as they came round in a part-circle, so was already ‘with’ them when ready to shoot – and use of ‘burst mode’ gave the maximum chance of one decent frame.

Then there’s the question of focusing – if you just ‘autofocus’ against a complex background that seems to give lots images of blurred flying cormorants against blurred backgrounds. I think the camera just has too much to do in the time.

I settled on just trying the birds that were flying a little higher, so that the background was just a plain blue sky. Sorting through all the many shots taken later on, there did seem to be one or two half decent (click to enlarge a bit).

There’s no doubt a good pro with the best equipment can do a thousand times better, but then he/she can’t put it away in a pocket.

During this variable English summer weather, those days when the sun really comes out have been accompanied by the appearance in the garden of bees, hoverflies and a varied smattering of butterflies, usually the odd one or two, compared to the larger numbers within fairly recent memory.

The sharp eyes of granddaughter were the first to spot this pretty little insect, less than a centimetre across. Assisted by my Panasonic TZ80 macro facility, the photo shows just how pretty it was, and enabled identification as a mint moth – not actually a butterfly.

Mint moths are said to frequent mint and oregano plants, which was precisely where this one and several others appeared. It’s also a day flier as well as a night flyer.

Just goes to show that it’s well worth looking at the tiny flutterers, as well as the more obvious large ones.

Modern travel zooms are really easy to carry with you, yet still have the capability to zoom in on birds from a reasonable distance. My Panasonic TZ80 has most of the capability of the hefty SLR system with largish 300mm lens that I used to lug around decades ago.

But they do have their limitations, and photographing hunting birds is one of them – always on the move, never staying still for long. It’s tempting to destroy the blurry shots that come out, but some are actually quite attractive, like these consecutive shots of wagtails taking off, using the TZ80’s rather slow ‘burst mode’ and standard auto exposure.

You really get the impression of movement. Here are consecutive shots of a pied wagtail taking off and then in flight. 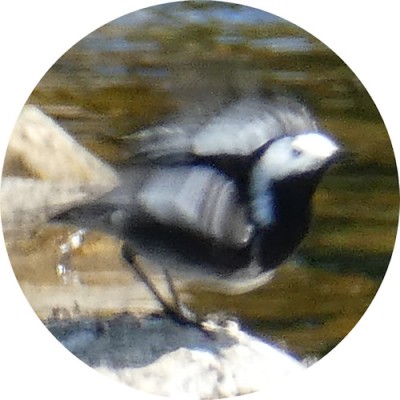 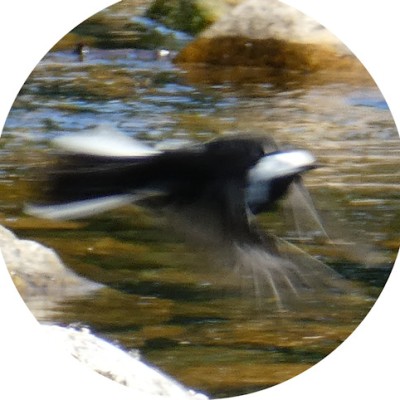 And here’s a grey wagtail taking off and turning in the process. 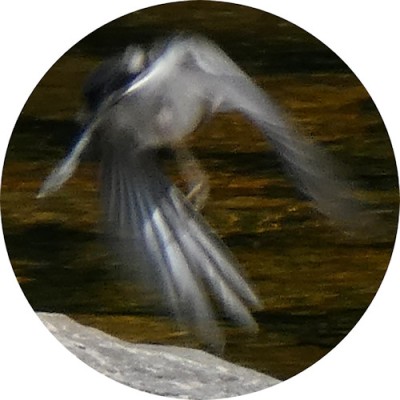 The other thing about travel zooms is the complicated array of buttons and menu options – different ways of taking the photograph. I guess I could have used ‘creative video mode’ or ‘4K mode’, either of which could have probably given more and sharper frames, but that’s for another day – and the blurring does have its own attraction!