Neumann’s Flash was formed when a salt mine collapsed in 1873. The Northwich salt mines had expanded rapidly without due safeguards, so inadequate supports were left to hold up the ground overhead.

A chemical industry developed around the production of salt, so the enormous holes created by this collapse, and the even more dramatic collapse of the nearby Ashton’s Flash in 1880, were in the 1950s used to dump lime waste. After dumping ceased, nature gradually began to recover and since the 1970s the area has been gradually developed into a country park, now part of the Mersey Forest initiative. Yes nature will recover, if given half a chance. See the story here.

Today, this is a great area for walking and birding, joining up with the nearby Anderton and Marbury parks. 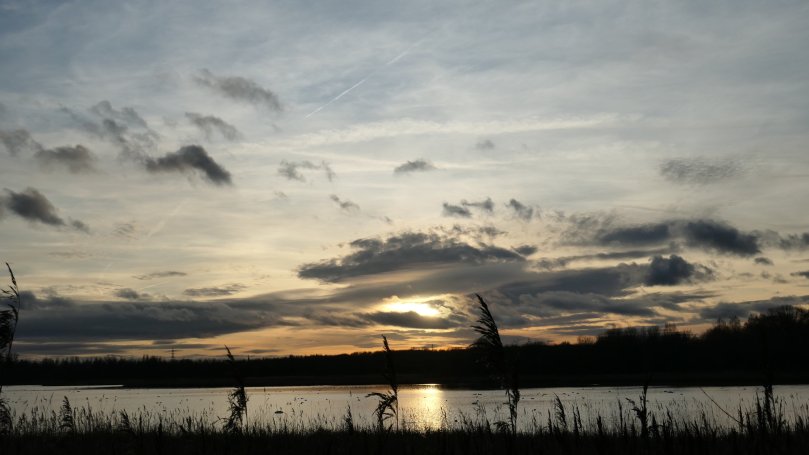 The picture shows Neumann’s Flash from one of its three hides, with a fair sprinkling of birds on the water, as the sun slowly sinks towards the horizon.

The featured image is a crop of the central area. 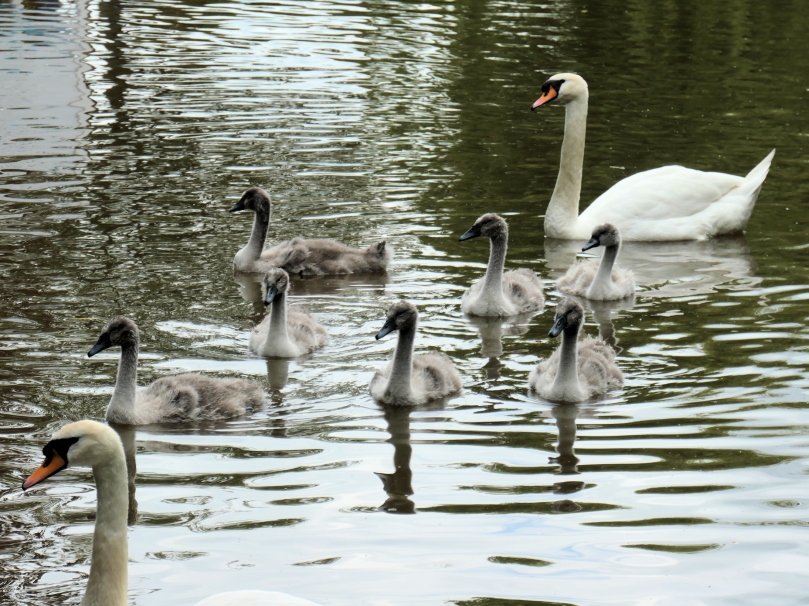 Still fiercely protective, the adults kept a wary eye out out until we were clearly going away.

Why are these swans called ‘mute’? Because they are not very vocal, compared to other swans.

Why are the young called ‘cygnets’? Well ‘cygnus’ is the old Latin name for swan, with ancient Greek origins. So we use the old Germanic-Saxon name ‘swan’ for the adult and the Roman-Greek name ‘cygnet’ for the child. Don’t ask why! It just shows how mixed in we’ve always been with Europe.

Another feature of the otherwise dead early February vegetation in Anderton Country Park is the opportunity given for these fluffy balls of nothing to show themselves off. My companion knew from childhood that this was ‘old man’s beard’, otherwise known as ‘traveller’s joy’ or clematis vitalba. 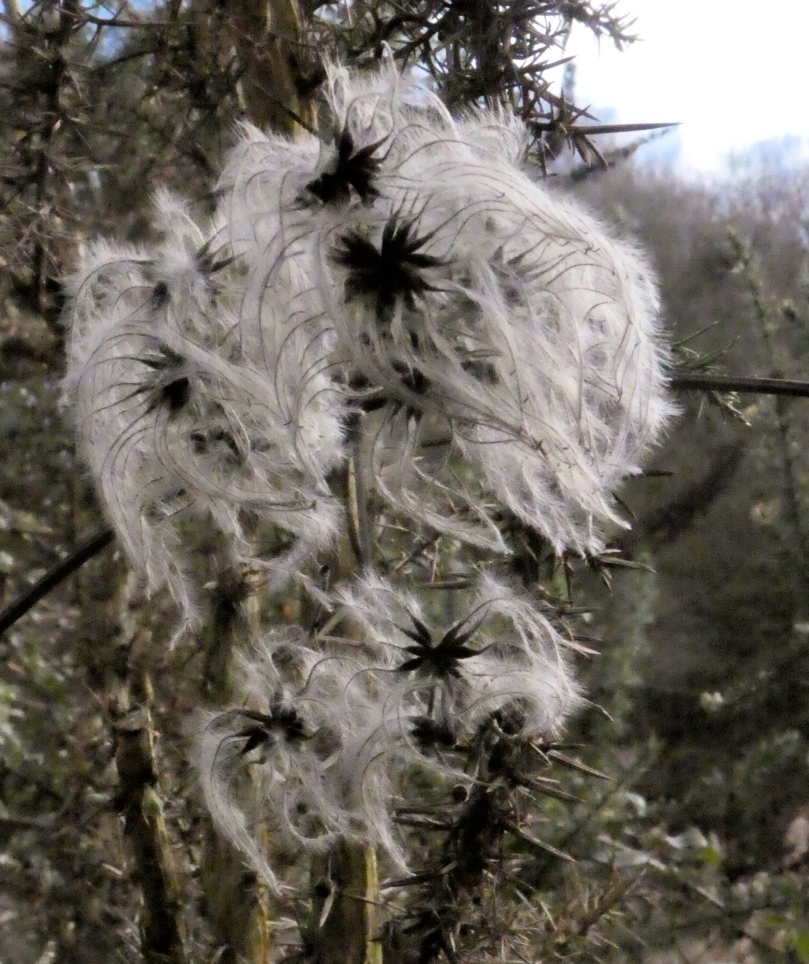 Of course, clematis is a climber and can be quite vigorous, as I know from having similar variants growing in the garden – all the better for disseminating seeds in the wind.

There’s not much apparently going on in the vegetation of the English countryside early February. Most of it is pretty dormant, apart from the odd flowering gorse and some early bulbs coming up. But we did come across these beautiful catkins in full glory in Anderton Country Park. 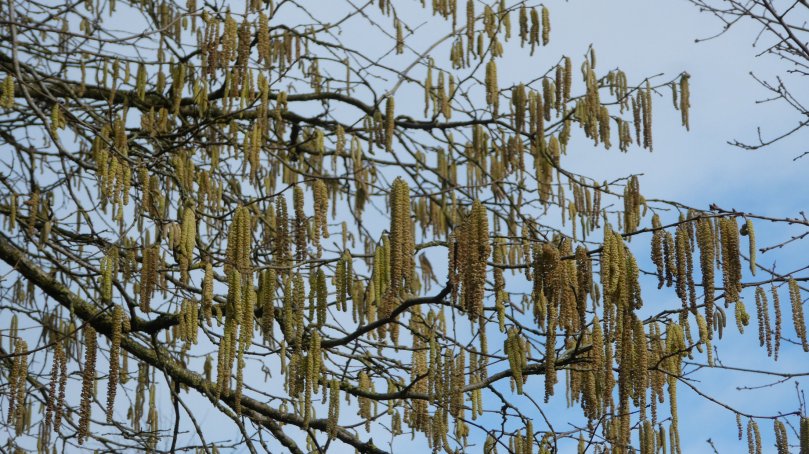 Catkins are actually flowers, with inconspicuous or no petals. They occur on a number of different tree types. This BBC Earth post suggests that these photographed are probably of the hazel tree, which has catkins late autumn, which then lengthen and turn golden with pollen towards the end of January.

Here they are close up. 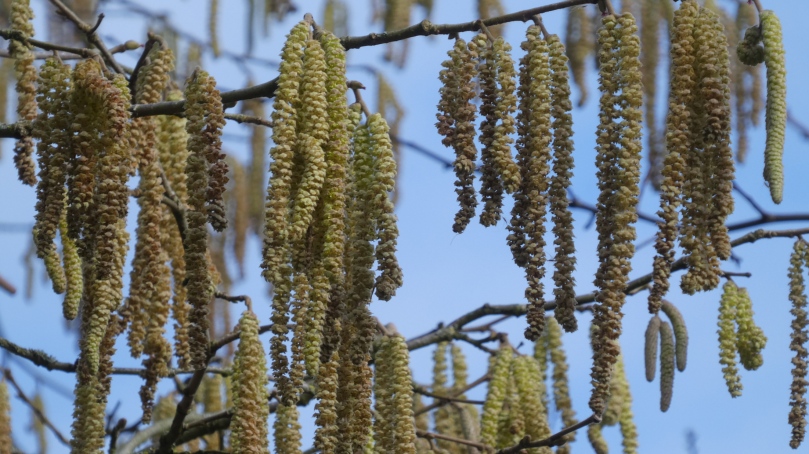 These lapwings were on Neumann’s Flash at Anderton Country Park. Periodically they would fly up with that mesmeric leisurely flap of their large wings, flashing alternately dark and white as they circled around the lake, only to descend onto the water at almost the same point.

The distance was a bit of a challenge for the Panasonic TZ80 travel zoom I had in my pocket, but the longish zoom made a fair go of it (handheld). 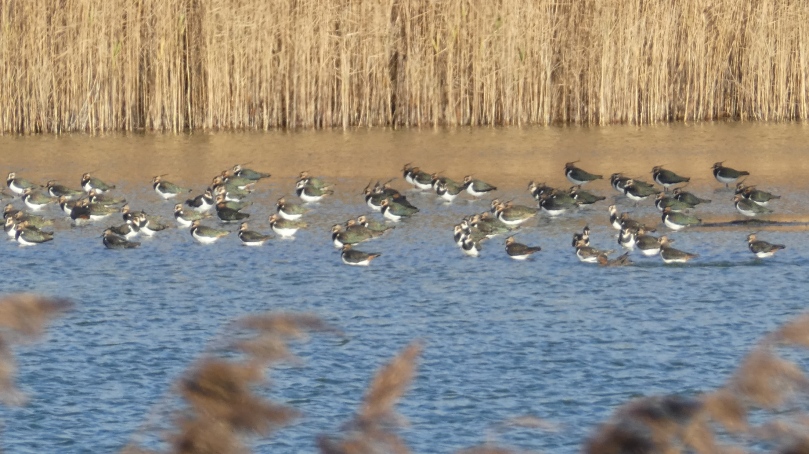 Suitable resizing and cropping gave the featured image at the top, like an impressionistic painting. The characteristic lapwing crest is apparent.

Lapwings are also known as peewits (onomatopaeic), or green plovers. You can see the green clearly in the photograph. Apparently, outside the UK this is called the Northern Lapwing.

This is a great time of year to be walking in woodland. Here are some lovely autumn colours from Anderton Country Park the other day. 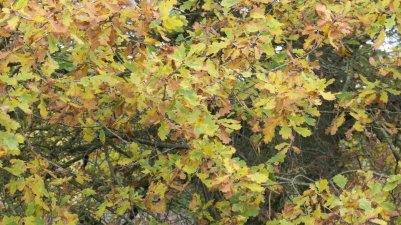 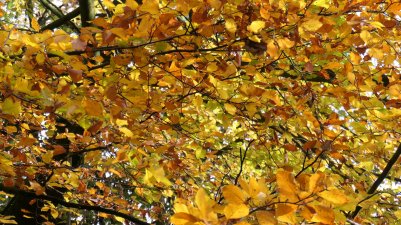 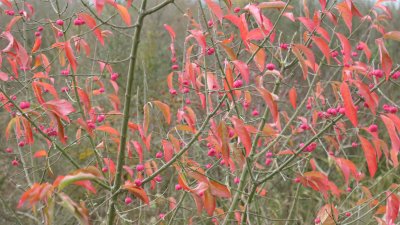 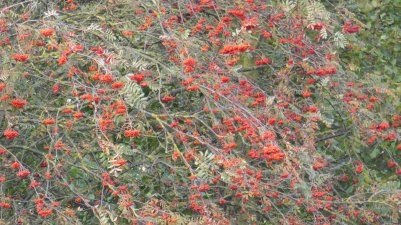 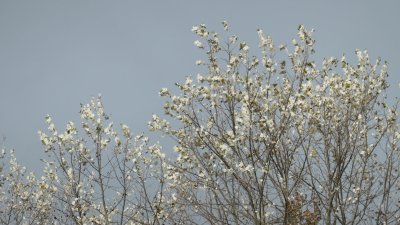 These lapwings at Anderton Country Park were too far away for a sharp photograph with my travel zoom, but I rather like the impressionistic picture. You can just about make out the characteristic lapwing crests. (Yes, there are a few ducks and gulls in the mix.) 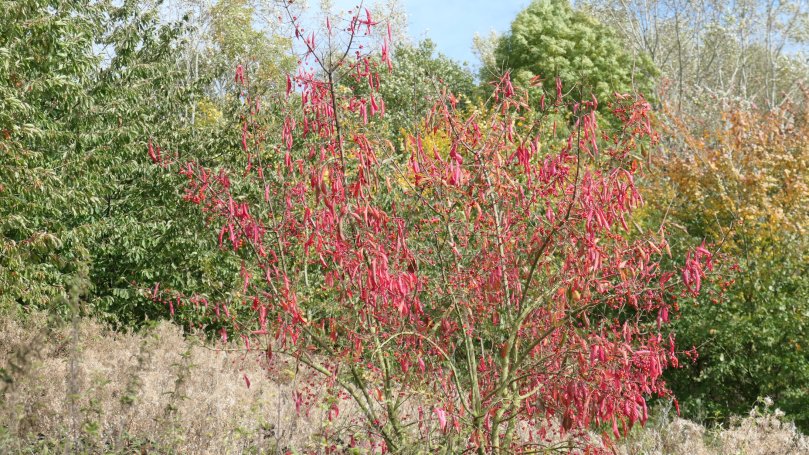 Most of the trees in Anderton Country Park are still green, many tinged with yellow and brown. Then there is the occasional splash of red, notably these wonderful Spindle Trees, with red leaves and red-and-yellow flowers. The rest of the year these trees are quite anonymous, but now, what a sight to lift the spirits!

Much of the area to the north east of Northwich town centre was industrial wilderness for a long time. It was like a grey ash-covered wasteland when I first visited Northwich in the late 1960s. But the land is now very much being restored. It was pleasing to recently see these buttercup meadows in full flower in Furey Wood (old tip) and Anderton Country Park (old industrial land). 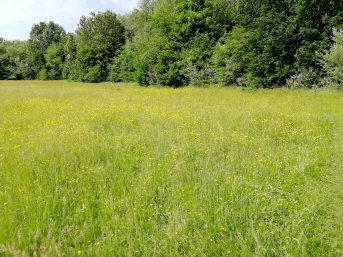 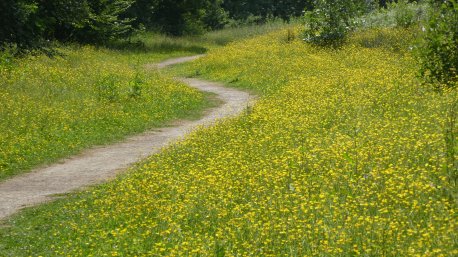 Yet there is a long way to go. Great biodiversity there is not. The buttercup is the great surviver and coloniser. Like the silver birch tree, it does a great job on reclaimed land. But this is a long way from the incredible richness and biodiversity of the glorious meadows, such as I first witnessed in Switzerland in the 1960s.

Like much of the British countryside, centuries of industrialization and increasingly large-scale farming have taken their toll. This is an over-exploited landscape. There is still a long way to go.

Northwich in Cheshire is notable as being an old salt town, so much so that during its history there have been frequent occurrences of subsidence as the land has subsided into old salt workings below. This proved a big problem for bridges over the River Weaver, which provided Northwich’s water link with the River Dee. The bridge pillars gradually subsided. 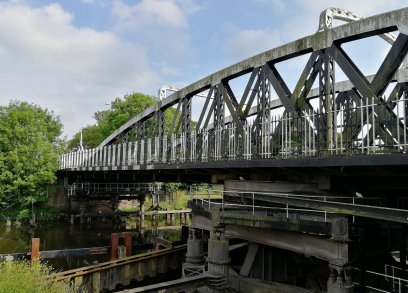 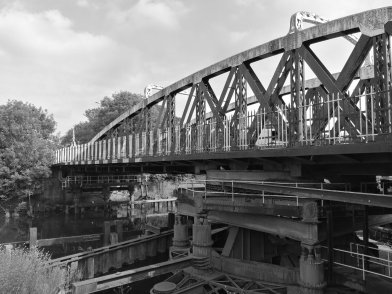 This was solved in 1898 with the building of the Hayhurst Bridge, followed the Town Bridge in 1899, the first electrically powered swing bridges in Great Britain. Two bridges meant that one was always open to traffic. 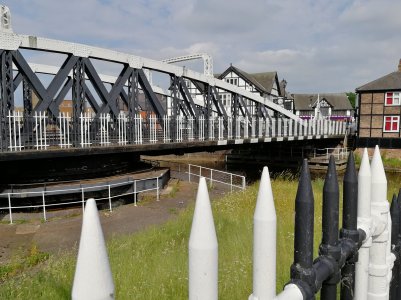 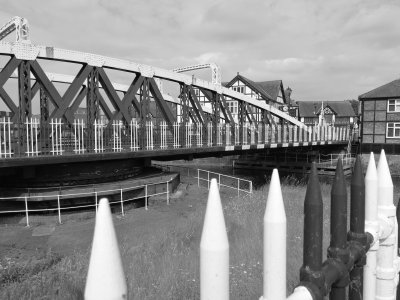 To avoid the subsidence problem, these bridges were built on floating pontoons, said also to be also the first of their kind in the country.

I’ve included monochrome images, trying out the capabilities of my new phone’s camera. I thought the black-white bridges could look better this way, but the colour versions actually look better to me.

What a glorious springtime in many woods in the UK, with the bluebells out. The above are at Anderton Country Park, Northwich. The following are in Tatton Park, Knutsford’s Dog Wood, recently cleared of invasive species to encourage just such native plants.

At the same time you also get the deeply pungent smells of wild garlic, with its white flowers. Somehow each sticks to its own, as you rarely see them closely intermingled.

We first went through Winnington, near Northwich, Cheshire, in 1970 in our first car – a split-windscreen Morris Minor affectionately called ‘Creeping Moses’. I have a vivid memory of the grey ash that covered everything in Winnington – bushes, trees, terraced houses – in the vicinity of the enormous Imperial Chemical Industries chemical works with huge industrial buildings and smoking stacks. It was like an abandoned land at the end of some SciFi catastrophe.

It was only a few miles from our destination of Marbury Country Park, a former country house and WW2 prison camp which had even then become quite a pleasant park between Budworth Mere and the Trent and Mersey Canal. It was bordered by a huge stretch of lightly used industrial land belonging to ICI, spanning several miles between Winnington and another huge ICI factory at Lostock Gralam. Apart from the country park, this was definitely an area to avoid.

Over the intervening years, things have changed. The great ICI conglomerate was broken up and much of the chemical work has, I believe, moved elsewhere (perhaps that pollution is now in China?).

The boat lift at nearby Anderton, linking the canal with the much lower River Weaver, was refurbished in 2002 and made into a visitor attraction, complete with cafe and boat trips. As part of the Mersey Forest initiative, Anderton Country Park and Northwich Community Woodlands were established on the former ICI land linking the two sites – now fully connected with Marbury giving a much larger country park, and also linked by footpath to central Northwich.

There is a fine set of well-maintained footpaths criss-crossing the entire area, and we find it ideal for a Sunday walk, as do many dog walkers and cyclists. The area is still home to old industrial pipes, some apparently still in use, but they do not intrude. The only problem I could find was the succession of dog waste bags that have been attached to or thrown into bushes, rather than the provided bins – now what is that all about?

The settlement ponds have become nature reserves for birds, with bird watching hides. On our visit yesterday we saw swans, coots, tufted ducks, moorhens, shelducks, crested grebes, a buzzard and the ubiqitous canada geese, mallard and gulls, also a clacking of rooks. Only a grebe came close enough to capture on our small travel zoom camera. Neumann’s Flash is usually a good place to see hundreds of lapwing, flying in formation with those lazy flapping wings, but yesterday we were restricted to a token flyby of around twenty.

What a transformation of this area over 45 years from industrial wasteland to a haven for wildlife and recreation. It does show what can be done, and we should never despair at the depradations done to our environment. It will recover, but slowly, and I suspect that the biodiversity of this area is still somewhat limited – at least in terms of butterflies, bees, hoverflies and the like. But nothing can recover the lives that were undoubtedly blighted by that pervasive pollution.

It was interesting to drive home through Winnington. The grey ash is long gone. The (now) Brunner Mond chemical works are still there. Some of the old industrial buildings are obviously derelict but still standing, some are in process of being dismantled, and new housing estates are rapidly expanding into the area being freed up. There is even a garden centre. This area truly is being renewed, bit by bit.