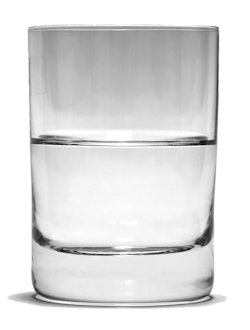 It is a well known characterisation that optimists see a glass 50% full of liquid as ‘half full’, whereas pessimist see it as ‘half empty’. Does it matter which of these attitudes we take towards life and towards its mega problems such as climate change and Brexit?

The bulk of psychological evidence suggests that it does. Optimists tend to be more realistic and thus more effective at addressing the problems. Pessimists tend to expect the worst, not look at things too closely, and hide from difficulties – hence the self-fulfilling prophecy.

Life is all about change, so an optimistic outlook is the only one that enables us to face and deal with the realities of change.

Of course, there are limitations to being positive if it is not tempered with a grounding in reality. (The Brexit campaign comes to mind!)  I’m arguing against myself, but maybe we should see optimism-pessimism as a polarity that is only resolved through the ‘third pole’ of realism.

The glass really is half full!