“‘He that followeth me walketh not in darkness,’ said our Lord. These are the words of Christ, by which we are taught how we must imitate his life and virtues if we wish to be truly enlightened and freed from all blindness of heart. Let us make it, then, our constant practice to meditate upon the life of Christ.”

I just came across a tiny (just over 4inx2.5in) copy of The Imitation of Christ by Thomas à Kempis, and those words form the very first paragraph. The book came from the residual estate of Uncle Will some years ago (not really my uncle, but that’s another story). Of course, this is a famous book in Christian circles, and I even have a paperback copy on my bookshelves, untouched for many years.

The thing about Uncle Will was that he was an essentially good man – very devout and proper, but always cheery and often exhibiting an impish sense of humour. Some found him ‘churchy’ and pompous, but the more I got to know him the more I understood that foundational goodness, a positive example to us all.

On reading that first paragraph of the book, I was suddenly struck that this was literally what Will had tried to do throughout his life – to follow the example of Christ – and with much success. Thomas à Kempis was one of his guides along the way.

Not so many people are drawn by such devout Christianity these days, but it is clear that its fruits can be rich indeed. I recall Will with great affection.

In “The Heart of Man”, Erich Fromm relates social narcissism to the Roman Catholic Church and to the Renaissance, in an illuminating discussion on the nature of periods of Renaissance which might give us clues to the nature of a New Renaissance.

When considering narcissism in large groups, such as major religions, Fromm suggests that there are counteracting forces of narcissism and anti-narcissism at work. He uses the Roman Catholic Church as an example, the personal humility that is at the heart of Christ’s teaching being at the opposite end of the scale to the intense narcissism of a church that believes it is the only chance of salvation and its officers provide the only path to God.

END_OF_DOCUMENT_TOKEN_TO_BE_REPLACED 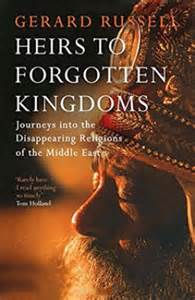 As we know, the war-torn Middle East is in a bit of a mess today. Gerard Russell was a British diplomat in various countries of the region for many years, and took a particular interest in some of its minority religions. His book of the above title reflects on these: Mandaeans, Yazidis, Zoroastrians, Druze, Samaritans, Copts, Kalasha.

The remarkable thing is that communities practicing these religions have survived for thousands of years, including long periods of Islamic dominance. Russell points out that in fact Islam has proved to be more tolerant in the Middle East than has Christianity in Europe,  where heretical and the so-called pagan religions were all but eliminated, notably through the Catholic Inquisition (e.g. Cathars).

Today, however, in the current environment of conflict, the survival of these communities is very much in doubt – for example the recent problems of the Yazidis and Copts have had wide publicity. Russell finds evidence that some members of the communities have found sanctuary in the US, but cultural dilution seems almost inevitable in such cases.

This readable and interesting book is written very much from the author’s personal experience, and is all the better for that. Worth reading if the subject appeals. I learned a lot about the various faiths. Russell has captured a picture of a disappearing world.

The message of the need for tolerance of the faith and beliefs of others is never ending.

Let’s trace it forward from the origins.

Evolutionary theory tells us that we emerged from a state of immersion into the world, as are the animals. The world was alive and meaningful, and every night we witnessed the full glory of the cosmos in the night sky. It was all one. We made sense of patterns of meaning, calling them what became known as gods. The sun was clearly the most important.

As we developed language and began to be more self aware, religions emerged based around these gods, pantheistic. Astrology was part of seeing patterns of meaning in the cosmos, and very much a part of this. I believe that the Hindu religions today are similarly pantheistic, and astrology flourishes in India.

From the so-called axial age onward, a series of monotheistic religions emerged from the austere Middle Eastern deserts, in turn Judaism, Christianity and Islam – and spread worldwide. From here on, I’ll stick to Christianity, the one I know most about.

When Christianity became a political project, in the time of Constantine, it became necessary to absorb the symbols of pantheism into that Christianity – politicians know they need to carry the people forward with them.

So you will find pantheistic and astrological symbols in most of the Christian churches – most notably in those wonderful Romanesque churches on the routes of the great European pilgrimages, such as that to Santiago de Compostella in Spain – and also notably in that great flowering of the Gothic cathedrals from the 12th century. See the stone signs of the zodiac, stained glass windows, the four elements of the fixed cross (Matthew, Mark, Luke and John), the wise men following the star, the green men, and so on.

So, certainly at this time, the church was happy to incorporate aspects of pantheism and astrology into its very fabric, their great archetypes enriching the religious experience. Look for it when you next visit one of those amazing religious buildings.

Of course this is all just circumstantial evidence and not a proper analysis. I’d be interested in any evidence that contradicts the suggestion that there’s no conflict between astrology and religion.

Images show the signs of the zodiac and tasks of the year on the cathedral in Amiens.