It has long been apparent to me that the pervasive materialistic perspective of human societies, driven by the great success of capitalism and science/technology, is slowly undermining the very ecosystem on which it depends. Human beings have become the scourge of the earth and the oceans, to the extent that those who are more aware desperately struggle to retain aspects of our natural world. 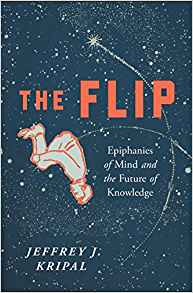 A different way of looking at things, a different perspective on life the universe and everything, is needed. Jeffery Kripal’s book The Flip suggests that there could come a tipping point after which a new world view will have come into being and be generally accepted. Kripal holds a Chair in Philosophy and Religious Thought at Rice University, Houston.

What is the flip, and could it happen quickly? This quote from an Amazon reviewer gives an idea:

Kripal’s book is basically concerned with the underlying paradigm of science, presenting material that will be partly familiar to those interested in the boundaries of science and spirituality. He gives many examples where scientists previously embedded in the materialistic paradigm have become converted to a wider view through their own experiences of so-called paranormal experiences, which science should be open to, but many scientists tend to discount because of their materialistic lenses.

The relationship between quantum theory and consciousness is particularly explored. Many of the pioneers of quantum theory were convinced of the limitations of materialism and had a more mystical perspective on life. Kripal explores these in a very readable manner, considering alternative metaphysical views that I’ve already summarised in an earlier post on The One Reality.

Then Kripal moves on to a stimulating consideration of the use of symbols that ‘point between’ the concrete aspects of reality, and the related concept of synchronicity. Dreams and mysticism are ways of approaching such symbols, which take us back to earlier levels of human experience.

In a concluding chapter Kripal moves on to summarise. It really does matter how we think of consciousness and the cosmos. From seeing ourselves as separate beings we come to see ourselves as aspects of an interrelated whole. But will that make us better human beings? Kripal makes us think, but there is no definitive answer!

As in Plato’s allegory of the cave, many individuals already have flipped, and are seen as strange and unrealistic by the majority. But the zeitgeist does flip – a look at history shows us, and the evident climate breakdown and chaos in contemporary Western politics suggests that something really is ‘in the air’.

It seems to me that, to effectively address climate breakdown and ecological collapse, humanity really does need to ‘flip’.

3 thoughts on “The Flip”