Still sorting through my photographs from Houston, I was trying to identify these birds that were feeding on the grass at Paul D Rushing Nature Reserve. Of course, they kept such a distance that a decent photograph was difficult, although you can see the key features from these. 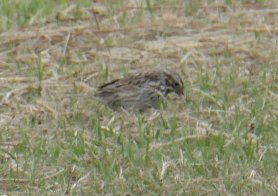 To European eyes it looked like some sort of bunting or sparrow. Consulting Wikipedia, it seems that American Sparrows are not quite what I had thought.

So it’s some sort of American Sparrow, of which there is a huge proliferation, according to Wiki. A song sparrow is a likely possibility, as these certainly over-winter in Texas (it was March).

One thought on “American Sparrow”