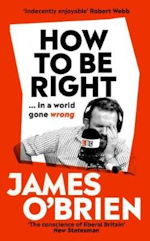 Just how gullible are we human beings, and how easily do we cling on to ideas that have no true justification? This question appears increasingly relevant to those of a liberal disposition, and is indirectly the subject of James O’Brien’s book How to Be Right… in a world gone wrong.

O’Brien runs a talk show on LBC radio and has callers on many controversial subjects: Islam, Brexit, LGBT, political correctness, feminism, the nanny state, Trump… The book basically gives his own ‘take’ on the subject from a ‘reality-based’ perspective, and demonstrates how various callers from different perspectives handle explaining their views, with many entertaining dialogues.

He essentially seeks to understand the caller’s viewpoint. The striking thing is often just how shallow those viewpoints are, and what little justification is given for them when questioned. It’s as if the person has unquestioningly swallowed a viewpoint and subsequently regurgitates it, without any understanding of why it might make sense. In other words, it is blind prejudice. They have effectively been brainwashed.

O’Brien’s technique is remarkable for its persistence, sticking to the point, and not allowing the caller to get away with simply restating their prejudice in another form. As well as giving us all ideas on how to handle the prejudice we inevitably encounter, it gives some insight into the minds that are most susceptible to populism.

It is also an entertaining read.

Featured pic of James O’Brien is from LBC website