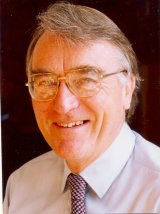 I was sorry to learn that James Robertson is to no longer produce his regular newsletter or maintain his website, This is a great shame, but one can well understand it at the age of 89.

I first came across James at Schumacher Lectures in Bristol, maybe in the 1980s, and was inspired by his ideas on economics and the money system, which originated in a career at times closely associated with UK governance. This inspiration has continued over the years since then, in his articles, books, talks, seminars and then his regular newsletters – Turning Point 2000 up to the turn of the millennium, and his regular email newsletter since then.

James’s ideas deserve to be more widely known. I won’t try to summarise; the following from the front page of his website gives a good idea. This truly does indicate a necessary component of a New Renaissance, as indeed James said in his Knutsford Lecture in the 1990s.

[My] key concern is the need for comprehensive reform of the worldwide money system.

However my current emphasis on it does not imply that I think the need to shift other aspects of human life in society from dependency to self-direction and self-control is any less important than I previously thought. Quite the reverse.

For example, enabling more people all over the world to decide and control their own work instead of depending on employers to provide and control it, will be one of many such interacting shifts in the overall pattern of systems renewal on which the future of humanity will depend. Connected shifts in spheres like education and health will be just as necessary. But virtually none will be possible if the worldwide money system goes on compelling or encouraging people to reject them.

In other words, comprehensive reform of the worldwide money system is a core challenge that will help to determine how much longer human civilisation survives and evolves in anything like its present form. It is a necessary condition, if not by itself a sufficient condition, of our survival beyond the end of this century.

Money and finance now constitute a worldwide system. As it works today, it results in systemic inefficiency and injustice in almost every sphere. It imposes a perverse calculus of values, compelling or encouraging almost everyone in the world to compete against one another for a greater share of planetary resources and, in doing so, to turn planetary resources into waste.

My understanding of these things began to crystallise in the 1970s, though its roots go back further than that. I came to see then, as others were seeing, that world society was in an early stage of a ‘great transformation’ and that, as has happened from time to time in history – for example, at the Renaissance – this would affect every aspect of human life.

I saw then that different people would respond in different ways to it.

I recognised that the actual future would be shaped by a mixture of all these and other responses, or visions, or scenarios. But I have focused since then on what the third one – the sane alternative – would mean in practice.

Some people still claim that people who support an alternative on those lines have no constructive proposals to offer. Such people are ignorant and wrong.

Over the past thirty years or more, increasing numbers of people around the world have been exploring what changes a sane alternative would mean for various aspects of life – for work, for health, for economy, for information and knowledge and education, for food, for the ways we use energy and technology, and so on – and how to bring about those changes.

Sustainable Development; People-centred Globalisation; Combining economic efficiency with economic justice; Progress that is socially just and environmentally benign; Money and Finance as servants not masters. Ideas and concepts like those are not just pipe-dreams. They are essential practical goals for the future of our one-world community and the prospect for its survival.

The conventional idea of progress, with indiscriminate economic growth, socially and environmentally damaging globalisation, and remote government decisions closely linked to the interests of business and finance, is not a possible way forward. It’s not enough now to say “the future doesn’t have to be like that”. It can’t be like that. Those who think it can are leading the world to disaster on a catastrophic scale.