I have a new respect for those wonderful images of birds in flight that you find on the blogs of various photographers. Since there were so many cormorants flying around at the location of my last post, could I get any decent results with my little travel zoom (Panasonic DMC-TZ80)?

Of course, the camera speed is not fast enough to freeze the bird in flight (see featured image of blurred flying cormorant), so you need to focus and pan as you take the photograph. Easier said than done, the speed at which these birds fly. I soon learned to track them as they came round in a part-circle, so was already ‘with’ them when ready to shoot – and use of ‘burst mode’ gave the maximum chance of one decent frame.

Then there’s the question of focusing – if you just ‘autofocus’ against a complex background that seems to give lots images of blurred flying cormorants against blurred backgrounds. I think the camera just has too much to do in the time.

I settled on just trying the birds that were flying a little higher, so that the background was just a plain blue sky. Sorting through all the many shots taken later on, there did seem to be one or two half decent (click to enlarge a bit). 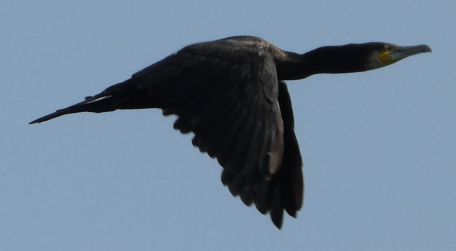 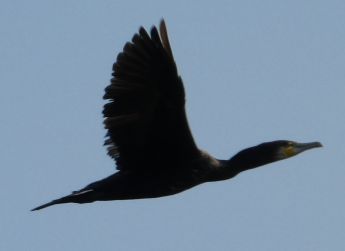 There’s no doubt a good pro with the best equipment can do a thousand times better, but then he/she can’t put it away in a pocket.