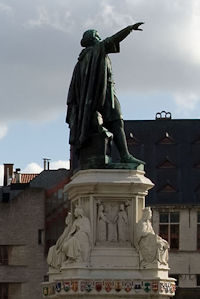 In the square of the Vrijdagmarkt in the delightful medieval centre of Ghent in Belgium, there is a statue of a local luminary – Jacob van Artevelde. He is so honoured because Ghent survived the 100-year war between England and France due to his efforts at ensuring neutrality and maintaining links with England. The statue points towards England.

Of course England has always had close ties with Europe, and periods of major influx of Europeans, such as the Romans, Angles, Saxons, Vikings, Normans. And we’ve been involved in so many continental wars over the centuries, culminating in the World Wars of the 20th century, when we took in many more as refugees.

The wise men of the immediate post-war world decided to link the countries of Europe together to avoid the possibility of future pointless wars, encouraged by the British, and Winston Churchill in particular. Of course this led to today’s European Union.

Strange then, that unscrupulous UK politicians have fostered the very nationalism that potentially leads to wars to engineer the UK’s exit from that Union. Something about ‘taking back control’ and ‘making Britain great again’ – the freedom to go off on our own, ‘do deals’, form alliances, and repeat unlearned lessons of history.

They should be ashamed of themselves.

Hopefully the duped UK populace will support a change of course in time.

One thought on “Ghent”