There is a battle of ideas in understanding the human situation and its history.

On the one side, we find the ardent materialists, who profess to be scientists but in reality follow the pseudoscience of scientism. They present a history of the ‘big bang’ and the gradual coalescing of matter into galaxies, stars and planets. Then, on planet earth, came land and sea and a favourable atmosphere, whence emerged plants and the panoply of animals, fish, birds and so on. And eventually random mutation led relatively recently to the human being, who at some point mysteriously became self conscious and completely different from the other animals. And the inexorable march of science is slowly explaining all these things, and will eventually be able to explain the ‘hard problem’ of consciousness.

In the other side, we find a view from inside out, taking consciousness as the primary feature of existence, and showing how consciousness itself has evolved since its dawning. In the beginning is a seamless unity with the world; then the emergence of self consciousness, magical and mythical stages moving into rationality, a super rationality of the divorced ego and ultimately a purported more integrated participatory consciousness. 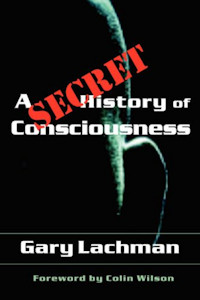 In this sort of world view astrology, and particularly astrological psychology, finds a natural place in meaningful relationship of the individual and the whole. And it is
this sort of viewpoint that is explored by another ex-rockstar Gary Lachmann in A Secret History of Consciousness.

This is really an exploration into ideas rather than the telling of a particular story. Lachmann looks at the work of many thinkers who have spent their lives investigating aspects of such stories. A partial list of these explorers will give some idea of the vastness of his scope: William Bucke, William James, Henri Bergson, A.R.Orage, P.D.Ouspensky, Helena Blavatsky, Rudolph Steiner, Goethe, Erich Neumann, Stan Gooch, Julian Jaynes, Colin Wilson, Owen Barfield, Jean Gebser, and so on.

This is a very readable, but also quite demanding book to read, covering such a wide range of extraordinary human beings and their major contributions to understanding consciousness. A veritable tour de force!

Based on an article that first appeared in Conjunction, magazine of astrological psychology, in 2012

2 thoughts on “Battle of ideas”